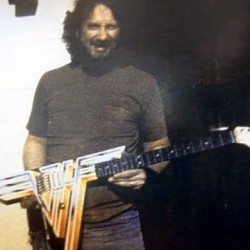 The VH logo guitar was built by Grover Jackson in the early 1980s to sooth over issues over making Bumblebee clones.  There are supposedly two of these that exist.  Above is Grover Jackson holding the one he sent to Ed.

Above is supposedly a prototype VH logo guitar that was sold at auction in 2008.  More info below from Vintageguitarzblogspot

“For your consideration is the rarest and most important Charvel guitar in existence. This 1982 Van Halen logo Charvel is 1 of 2 in existence made especially for Edward Van Halen, and is actually considered the prototype for the other. The guitar is in 100% original condition and remained in the possession of a Charvel employee for the last 25 years! The guitar was outfitted with an original unstamped plate void of a serial number as per Grover Jackson’s demands. Please read the story below…

STORY:
In 1982 I had just been hired by Eddie Money to play lead guitar, and Grover Jackson had been building guitars for me. I went to Charvel, when they were in Glendora, to meet with Grover and pick up my instruments only to find him distraught as a result of a dispute he was having with Edward Van Halen regarding Charvel endorsement. At that time, Grover produced a Van Halen logo guitar that he claimed was one of two built for Edward as a peace offering. He offered the one not given to Edward to me for the price of $300. I asked him, “What would I do with a Van Halen logo guitar? Thanks but no thanks.” In retrospect, not buying that guitar was one of the biggest regrets of my life. It had haunted me ever since, and I love telling the story.

Several months ago I was on the floor of my store, Vintage Gear Hollywood, buying 2 Fender Jazz basses when for some reason I happened to mention the story to the seller. He responded with, “I saw that same guitar this morning. It belongs to a friend of mine.” As it turns out, Grover had given the guitar to one of his employees who has had it ever since. I procured the phone number from the seller and called the owner. Several weeks later, he sold it to me. At this point, it might be good to mention that the other Van Halen logo guitar was a neck through guitar with a Jackson headstock. There was also another prototype/mockup that is pictured below in our auction, it can also be seen in the Charvel book, which was eventually destroyed. This was confirmed by numerous Charvel employees at the time.

Although Edward was given the other guitar as a peace offering, I was made aware of and saw a picture of him immediately trading it for a mint 1957 Strat at a guitar show. So there is a photograph of Edward handing that instrument to a vintage guitar dealer. We would appreciate any further information regarding the whereabouts of this photo. The Charvel employee who has owned the instrument since 1982 was instructed by Grover to mount a non-serial numbered Charvel neck plate as it was a prototype and not considered a production guitar. When I was offered this guitar, it was brand new in perfect condition. By the time I purchased it, it was in well-used worn condition. It had also fallen off the assembly storage rack at Charvel in the early 1980s (1982 or 1983) and had broken in 2 places.

Fortunately, it was left in original condition and was re-glued by the Charvel employee who I purchased the guitar from. It is in it’s original condition as when I saw it in the early 80s and is also what I believe to be the most significant and rare Charvel in existence. The combination of it’s rarity, as well as, it connection between Charvel and Edward Van Halen makes it a priceless and historically significant piece of rock and roll culture.” -John Nelson, Vintage Gear Hollywood

CONDITION:
This guitar is in all original condition. The writing in the neck pocket reads, “VH PROTO,” and on the neck itself is written “3595 O-D STD.” The guitar was originally gold and black, but has since turned green as does a Les Paul goldtop. It exhibits playing wear because it was actually used by the Charvel employees in the factory. It is broken in 2 places which resulted from an earthquake that damaged almost a dozen guitars at the Charvel factory in 1982 or 1983. The top piece of the wing, as well as, the bottom right leg of the “H” broke off. Both pieces were glued immediately after by the Charvel employee from who I purchased the guitar. The guitar works 100% and has no other originality or structural issues.”